This blog is for a lot of things; one of them is that it gives me a place to drop information that took me some work to find but seems relevant to many people.  This is one of those posts =]

Many people who want to play with the full range of D-Star may not have (or may not always have) available an Icom D-Star enabled repeater to use.  There are also those who consider Icom’s equipment to be just a little bit too expensive and so have built homebrew repeaters that work with D-Star.

Thanks in part to the efforts of Ray Novak of Icom America (HamStudy’s main sponsor) who has reportedly been a vocal advocate of third party D-Star accessories, Icom has been very open to third party tools that work with D-Star, as long as they are clear about what is or isn’t supported.  Icom does not, of course, provide any support for these devices.  That said, there are several options for “hotspots” both for a very short area, such as the DV Access Point dongle, and for a larger area by connecting to the data port of a standard 2 meter or 70cm radio.  It is also possible using these products to create a home-brew D-Star compatible repeater, though it will not work in all ways like an Icom repeater and it won’t have access to Icom’s routing network, only the third party extensions.

I particularly recommend for these purposes the Matrix Circuits Star*Board(tm) sold by MoenComm LLC. I purchased one and initially had some trouble with it — and I’m not at all certain that I didn’t cause the trouble — and Jim replaced it without a blink, shipping me the replacement and just asking that I send the other one back as soon as possible.  He does a great job of supporting the product, and was kind enough to fact-check the first version of this blog post and provide very fast feedback and additional information. Thanks, Jim!

ID-5100 not receiving from the hotspot

Here in Utah County I’ve had a D-Star hotspot up on 438.850 for nearly a year and have enjoyed playing with it with my Icom IC-800 (worst radio I’ve ever used), my Icom IC-7100 (awesome radio), and my Icom ID-51.  These have worked great, and I’ve been using it most weeks to check into the Utah D-Star net.

Then recently I purchased a ID-5100 — best dual band mobile radio I’ve ever used, btw — and was a bit worried to discover that it couldn’t access the hotspot.  More specifically, I could hit the hotspot with the 5100 just fine, but I didn’t hear anything coming from the hotpot.  All the other radios worked, but the ID-5100 did not.  I was starting to suspect a defective radio, but it could hear D-Star signals from all of the others, just not the hotspot.

The problem seems to be that the ID-5100 is quite a bit pickier about the deviation of a signal; apparently much higher than any of the other radios.  I suspect this is because the ID-5100 automatically detects analog signals when in DV mode and optionally switches to standard FM mode to receive them. Many third party D-Star modules are tuned to work with all available receivers, but since the 5100 is a bit more selective than others it is just outside the range of the spec.

According to Jim Moen, who responded to my request for fact-checking this blog post, similar problems have been seen with the ID-31 and ID-51, though I personally did not experience any issue with my ID-51 and thus expect that the 5100 is the pickiest thus far.

Fortunately as I was researching the problem I came across a mailing list thread from others having the same issue. It turns out that the Star*Board has a screw-potentiometer (R36) that can adjust transmit deviation. In some cases, such as mine, the best setting was at the maximum level of the R36 POT. The solution is to remove (and bridge) the R6 SMT resistor in order to provide more drive into the radio.

Apparently the specifics of where that level needs to be may vary a little bit depending on which radio you use.  I’m using a Yaesu FT-7800 for this hotspot, and just removing R6 and replacing it with a (very ugly) solder blob was all I needed to be up and running.  It took longer to bring the hotspot down to my shack from its home in my garage and get it hooked up to an antenna that I could use than it did to actually do the mod.

With that change, everything is working great! 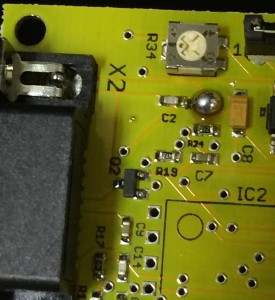 Words from the factory (so to speak)

Though I tried to work in the details he passed along above, I decided after some consideration to include the (mostly) original text of Jim’s email to me, just in case I may have missed anything useful.  I have edited it in places where it referenced things that have been fixed in this post.

Thanks for your help and your product, Jim! We of HamStudy solute you and your company for not only providing a great product, but even more for standing behind it and doing more than your fair share to educate and promote understanding in the Ham Radio community!

This entry was posted in D-Star Operation. Bookmark the permalink.